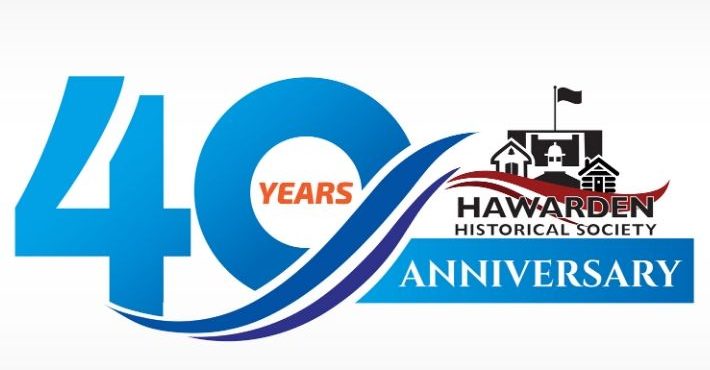 The Society began in 1979 when a committee from the Mutual Improvement Club called a meeting for all residents interested in forming a historical society.  The Society was officially incorporated as the Big Sioux River Valley History Society with the state of Iowa on July 11, 1979.  The name was the result of interest in the early settlement of old Calliope, the townships of Buncombe, Logan, parts of Eagle & Washington and Virginia TWP., Union Co., South Dakota, as well as interest in the comparative new-comer, the town of Hawarden.  By, October, 1979 the Society had 236 members.

In April, 2016, to improve our name and location recognition, the Society added “Hawarden Historical Society” as our “doing business as” name.  A new logo showcasing the new name, where we are located, what we represent and what we do was introduced in 2019.

Thanks to the visionaries who started the Society – Preserving Our History

In 2019, our organization looks very different.  Our Board of Directors and Officers are one and the same.  We all wear “several hats”.  President – Dave Pusey, Vice-President – Dan Cain, Treasurer – Judy Scott, Secretary –Carol Frerichs, Member at Large – Marsha Eilers.

The biggest project in the early 1980’s was the “Development and Growth of Calliope and Hawarden” photographic exhibit.  The exhibit was displayed in the City Hall in the fall of 1981.  Success of this project was due to the efforts of project chairperson Myrna Ver Hoef, Helen Gregg and the entire community.  Photos from this exhibit are on display at the Historical House and can be accessed from the Hawarden Public Library website – Digital Library – Vipond Collection.

Did You Know?  In 1984, the Society teamed with L.G. Everest to move a large quartzite rock to Roadside Park, the site where Sioux County was founded in 1860.  Roadside Park is 3 miles south of Hawarden on Highway 12.  This site is maintained by the Sioux County Park system.

In 1982/1983, the Society became active in the continuing preservation of the old Stagecoach Depot, which eventually led to the organization of the Calliope Village Project in 1983.  Calliope Village was on the radar of Ron Zachary Hill who as early as 1975 had a vision of a historical village in Hawarden.  Ron took on the task of securing funding and resources to restore “Grandma Carr’s” house back to the original old Stagecoach Depot.  With the help of Ron’s fellow Boy Scouts, Troop 209, the City, and several other volunteers, the restoration was completed.

The Calliope Village project really began to move in July of 1984.  Several buildings were added to the site; each one with a project chair responsible for the renovation. The objective was to have the village open for tours for the 1987 BiCentennial.  During the 1990’s and 2000’s, buildings continued to be added or built onsite and we became a destination for tourism, especially with the push in the mid to late 2000’s to become handicapped accessible.  Our chief ambassadors for Calliope Village have been Lois Jean Dawson and JaNohn Wasser.  They were our guiding beacons and we miss them!  But when in doubt, we always ask “What would Lois Jean and JaNohn do?”.

In 2011, Stuart Flynn donated his WWII Homefront Collection to the Historical Society.  This is definitely a coup for the Society.  Unfortunately we are missing Stuart and his expertise on his collection, so we are looking to find someone to help us inventory and display the collection.

We have also undertaken the restoration of Old City Hall (OCH).  This building was added to the National Register of Historic Places in 2009.  Since then we have started work on the building – we have demoed several of the interior rooms, returned window openings to the original size, installed new circle top windows, double hung windows, and new front doors and restored several of the original windows.  The building was tuck pointed a few years ago, so now is looking really great on the outside.  Still lots of work on the inside – new plumbing, wiring, heating, elevators, …  But we are continuing to move forward.

This has been just a “short” synopsis of the Historical Society; how we started, our history through the last 40 years, and what needs to be done going forward.  Still lots of work to be done – just maintaining our current collections is quite a job.  “Preserving Our History” is a journey.

Thanks to all of you for your support!  We hope to see you on August 11th at our 40th Anniversary Celebration at Calliope Village from 1 – 4 pm.  Refreshments will be served, the Calliope Store will be open and selling candy and pop, and the Hawarden Library pop-up will be at Calliope at 2 pm.