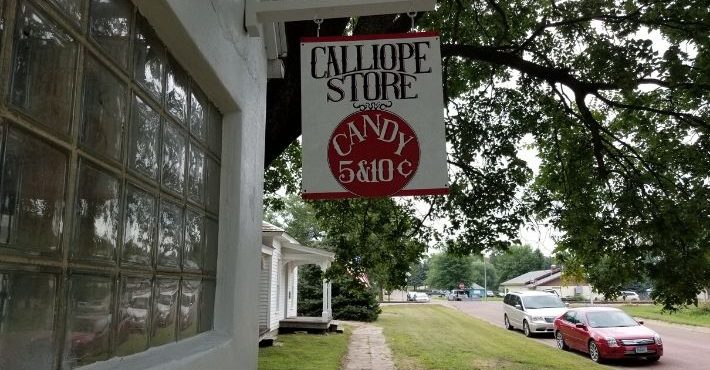 Hawarden, IA– After being closed for 42 years the Historic Calliope Grocery Store has been refurbished and given a new life.  The store has changed its name and it has gone from a full purpose grocery store to just a candy store that will only be open for special events.  The store will be open for Hawarden’s Big Sioux River Days, Labor Day weekend.  The Calliope Store is located at the Historic Calliope Village.

The Calliope Store, which operated under the name of the Northside Grocery, was in operation from 1920 until it closed in 1976 becoming a residence.  Since it is on the fringe of the Calliope Village and such an integral part of the town’s history, the Hawarden Historical Society made it their goal to add the building to the Village.  In 2017, the store was purchased by the Historical Society and renovations began.

Now a year later the store is set to open with a Ribbon Cutting on Thursday, August 30, at 10 a.m.  The store will also be open for business on Sunday and Monday afternoons, selling 5 and 10-cent candy.

“The store is such an iconic piece of Hawarden’s history.  People have a lot of memories of the former owner Goldie, penny candy, and shopping at the store on Sundays, long before convenience stores came into being,” said Carol Frerichs, with the Historical Society.